A brief history of the hall

Braunston and Brooke Village Hall was built in the 1920's on land bequeathed to the village by Mrs G Hanbury and Mrs G Finch in 1923. The stone walls of the large hall were erected from stone recovered from the two cottages that originally stood on the site.

Further building works have been completed over the years to make the hall what it is today. The first renovations took place a decade later to build the small hall and the flat above the property. From the 1970's onwards each decade has seen additional improvements which included storage facilities, new toilets, a new damp proof course , double glazed windows and a new oil fired central heating system.

Since 2000 we have seen the most significant changes thanks to the help and support of local residents, local businesses and charitable grants. During this period we have had a new roof, a large new kitchen, electrical and safety work completed and new toilet facilities which include a large disabled toilet. This has been topped off by a smart new entrance to the hall allowing for disabled access to the hall. And our latest improvement is the installation of fast wireless broadband, which is available to all our hirers 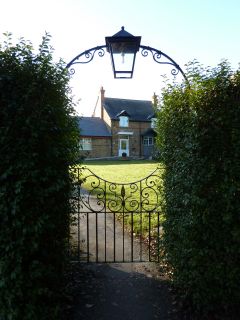 The wrought iron gates which provide a beautiful entrance to the hall and gardens were erected in memory of the late Ivor Freeman who both served as Chairman and Treasurer of the Village Hall Committee and the late Frank Ward who organised and ran our annual Flower Show for 35 years.